In the diagramme of a running computer, dual booting looks a bit like this: 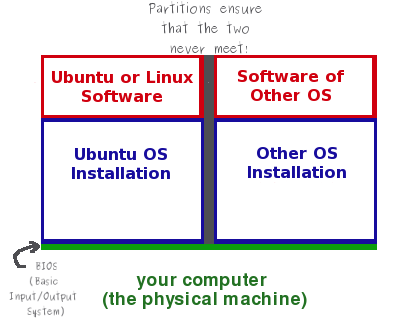 While the hardware remains the same, the running operating system and software are separate from each other. Therefore, you cannot share applications (at least not without an emulator).

If you are limited to one computer for any reason, dual booting is an effective way to have two computers for the price of one. It affords you the capabilities of both operating systems without the purchase of another computer.

Writing is a different matter. Ubuntu can write to both, but writing to FAT32 is older technology and therefore more stable. The ability to write to NTFS is relatively new for Ubuntu and Linux in general. Therefore, there may be a few glitches that have not yet been found. If you want to be sure that Ubuntu can read and write to your Windows harddisk, it is best to install Windows with a FAT32 filesystem.

No. Microsoft usually tries to pretend that Linux does not exist. Therefore, Windows does not recognise that Ubuntu is even installed. If you need this functionality, you might contact Microsoft and ask for it.

If you want to share the files between the two, however, you can use Ubuntu to write the files to the Windows partition. Windows will then recognise the files when it next starts up.

See how to install and setup Ubuntu:


A Brief History of Linux
The Linux kernel is the basic programming foundation for the entire Ubuntu operating system. Here is how it started and why it is called GNU/Linux.

Ubuntu, Comparatively Speaking
Ubuntu compares well against any operating system in use today, including Windows, Mac, and other Linux versions.

Get Ubuntu Linux: Download, Request, or Order Ubuntu
Ubuntu can be downloaded or ordered and is available in a couple of versions: 6.06 (Dapper Drake) and 7.04 (Feisty Fawn). Which you use depends on the software you need. This page shows you from where you can download, request, or buy Ubuntu.

A Brief History of Ubuntu
Ubuntu's history started with Debian GNU/Linux but has since outgrown it. Here is a brief look at Ubuntu's past and how things stand today.

Adding Ubuntu Repositories
Adding Ubuntu repositories to download more Linux software is not very complicated. It is a simple matter of telling Ubuntu where to find more software.

Additional Ubuntu Repositories
Ubuntu software is available in more repositories than the default Ubuntu installation gives you. Here is a listing of more Ubuntu repositories for your software needs.

How to Install Ubuntu Linux 7.04 (Feisty Fawn)
Ubuntu Feisty was released in April 2007. It is the easiest Ubuntu to install yet. Here is how the installation of Ubuntu Feisty is different from 6.06 LTS.

Booting Windows Instead of Ubuntu by Default
Grub boots Ubuntu by default. But if you want to make Windows your default operating system without losing Ubuntu, all you need do is change a number in Grub's configuration file. Here is how.

Setting Grub Timeout When Dual Booting Ubuntu
Grub's menu is hidden by default. Making it visible at startup is a matter of editing grub's configuration file. Here is how.

Dual Boot Ubuntu With Windows
Dual booting Ubuntu with Windows or another operating system is not particularly difficult. This guide shows you how to dual boot Ubuntu and Windows.

Make Grub's Menu Visible At Startup
Grub's menu is hidden by default. Making it visible at startup is a matter of editing grub's configuration file. Here is how.

A Primer for Installing Ubuntu
Installing Ubuntu should be as easy as possible, and the best guides for this are provided here at Easy Ubuntu Linux. But all the online resources in the world do not help you offline. For this reason, we are providing this PDF primer to help you install Ubuntu.

Setup Your E-mail On Ubuntu: Part 1
Sending e-mail under Linux is easy. Here is how to setup your email identity under Ubuntu Linux.

Receiving E-mail
Sending e-mail under Linux is easy. Here is how to receive email under Ubuntu Linux.

Sending E-mail On Ubuntu
Sending e-mail under Linux is simple. Here is how to setup Evolution to send email under Ubuntu Linux.

Office Suites for Ubuntu
Choosing an office suite for your Ubuntu installation is like choosing the first among equals. Here is a comparison of the best office suites available for Ubuntu Linux.

Upgrading Ubuntu
Ubuntu upgrades are easy to affect. As usual with Ubuntu, you get to choose how to upgrade.

Install Ubuntu Upgrades By Updating Your Installation
Ubuntu Upgrades are a choice of two straightforward processes. Here is how to upgrade and update all of your programs at once.

Affect an Ubuntu Upgrade With An Install CD
Ubuntu Upgrades are as easy as the installation. Here is how to upgrade and save your data.

Receiving Email via IMAP
Sending e-mail under Linux is easy. Here is how to receive email under Ubuntu Linux.

Image Handling With Ubuntu
Ubuntu's image handling surpasses those of other operating systems. Whether you just need to look at your pictures or create first-rate graphics, Ubuntu offers a program to meet your needs.

Photo Previewing and Slideshows With GQView
GQView is an additional photo previewing program for Ubuntu. Here is a brief tutorial on how to preview and edit photos with GQView on Ubuntu.

Configure Ubuntu
The default Ubuntu configuration is good for most users. However, you will inevitably want to configure Ubuntu to suit your tastes better.

How to Use Ubuntu
Once Ubuntu is setup, you may still wonder about how to use Ubuntu. This section will show you how to setup and use software such as email, office suites, and photo editing software.

Installing a MySQL Database Server
MySQL is the most common database server in the world. Here is how to install MySQL on Ubuntu Linux.

MySQL Database Configuration
MySQL is the world's most common database server. Here is how simple configuring MySQL can be on Ubuntu Linux.

Installing PHP on Ubuntu
PHP is one of the main languages used in developing for the Web. It allows you to create web pages dynamically on Ubuntu.

Configuring PHP on Ubuntu In-Depth
PHP is one of the main languages used in developing for the Web. Here is an in-depth look at configuring it on on Ubuntu.

Reading the php.ini File from Ubuntu
PHP is one of the web's main languages for development. Understanding how to configure PHP allows you to create web pages dynamically on Apache.

Configuring Samba on Ubuntu I
Samba is a file sharing server for Ubuntu Linux. It allows filesharing with others from your computer. This guide shows how to configure Samba on Ubuntu.

Configuring Samba on Ubuntu II
Samba is a file sharing server for Ubuntu Linux. It allows filesharing with others from your computer. This is the second page of a guide that shows how to configure Samba on Ubuntu.

Learn PHP with Ubuntu - PHP Tutorial for Ubuntu
Learning PHP is not difficult with Ubuntu. This PHP tutorial helps you begin to learn PHP for Ubuntu.

Learn PHP with Ubuntu - PHP Tutorial on Datatypes - PHP Datatypes
To Learn PHP is not difficult with Ubuntu. In this PHP tutorial, we look the importance of PHP's datatypes.

Credit Card Validation Before Processing
Processing credit cards is a fundamental process when you do ecommerce on Apache. Here we walk through some of the more common options for credit card processing on Ubuntu.

Credit Card Processing Choices
Processing credit cards is a fundamental process when you do ecommerce on Apache. Here we walk through some of the more common options for credit card processing on Ubuntu.

Ubuntu Netbook - Get Ubuntu on a Netbook - Netbooks Running Ubuntu
An Ubuntu netbook gives you the facility of a netbook with the advantages of Ubuntu. Here we see the beauty of running an Ubuntu netbook.

Linux Netbook - Get Linux on a Netbook - Netbooks Running Linux
A netbook is a very small laptop that has lower specifications than the usual lap top. This makes it perfect for Linux. Here we look at the advantages of a Linux netbook.

Learn PHP Syntax with Ubuntu - PHP Tutorial on Loops - PHP Loop Syntax
PHP loops are not difficult to learn. It is simply a matter of remembering each formula. This PHP tutorial shows you how PHP loops work on Ubuntu.

PHP Tutorial on the Value of Constants - Learn PHP - PHP Constants on Ubuntu
To learn PHP is not difficult with Ubuntu. In this PHP tutorial, we look at the value of constants.

PHP Tutorial on Defined Constants - Learn PHP - PHP Constants on Ubuntu
To learn PHP is not difficult with Ubuntu. This PHP tutorial shows how to test for defined constants and then to define them if they are not a PHP constant.

Learn PHP Expressions - PHP Tutorial on Expressions
To Learn PHP is not difficult with Ubuntu. In this PHP tutorial, we look at the importance of understanding PHP's expressions.

Linux Notebooks
Linux notebooks are not as rare as they once were. It is nonetheless possible to buy a notebook and find that you cannot install Linux on it. Here is a series of guides for how to install Linux on different notebooks.

PCI DSS - What is PCI DSS
PCI DSS is one of the most important elements of e-commerce. Even if you run your own credit card processing business, you would be forgiven for wondering 'What is PCI DSS?'. This cryptic abbreviation is explained here.

PCI DSS Network Security- Checklist for Securing Your Firewall According to the PCI DSS
The PCI DSS requires a secure firewall in the first instance. Here is the PCI checklist for securing your network.

Email Solutions on Ubuntu Linux
Email solution on Linux vary according to how much control and accessibility you want to have. Here we see what is available for email solutions under Ubuntu Linux.

Ubuntu Add User
To add users in Ubuntu allows for a true multi-user system. Here is how to add user in Ubuntu.

Replace the image above, with your own RSS. Alternatively, you can use the

tag. Details of this can be found on this page. -->

Does your computer make you this happy?

If not, you need Ubuntu

Registry Cleaner offers easy-to-use optimization tools to speed up and improve the stability of your Windows 7, Windows Vista, or Windows XP PC. Regardless of your level of expertise, Registry Cleaner safely cleans, repairs, and optimizes the registry and automatically backs up changes for future recovery.

Unless otherwise stated, all material contained on this website is copyrighted to Easy Ubuntu Linux.com.
All rights are reserved. All content is provided AS IS without any warranty of any kind for any purpose.

If you have a question or comment about Ubuntu or this site, please send email to
'webmaster (at) easy-ubuntu-linux.com'
(remove single quotes and replace "@" for " (at) ").